… and the kids hated us.

END_OF_DOCUMENT_TOKEN_TO_BE_REPLACED

Let’s see.  Almost three years after my last post, what has changed?

I’m sorry for neglecting you.  I got caught up in the thing called life.  Forgive me?

Sweet – so a catch-up is in order because my last posting was last year… like, the last quarter of last year, haha!

All is well!  Life is relatively grand.  I spent the holidays with my new family and learned many, many British Christmas traditions while introducing them to some of my American ones.  I’ll throw something up on that later, though as I’m sure most of you don’t care all that much.

I promised photos from Stourhead National Park which I visited with my partner during my time off that week in October, so here they are!

P.S. If it looks familiar, it’s because it was used for a few scenes in Pride & Prejudice.

Robin Hood and Little John walkin’ through the forest
Laughin’ back and forth at what the other’ne has to say
Reminiscin’, This-‘n’-thattin’ havin’ such a good time
Oo-de-lally, oo-de-lally, golly, what a day

Instead of spending my Reading Week off from University reading (I did do some, I promise!), I spent it traveling about England with The Gent.

I am about to sound very American, so forgive me, but… I went to Nottingham… and freaking Sherwood Forest!!!!!

Please keep in mind that there was no lack of the animated Robin Hood (1973) in our house, let alone Robin Hood: Prince of Thieves and Robin Hood: Men in Tights when I was deemed “old enough” to watch them, so this was basically living out the childhood fantasy to visit said woods.

The Gent is a wonderful human being in that he not only took me to the woods (and may, or may not have skipped through them with me singing “oo-de-lally” and “there was a rich man from Nottingham…”), but he also took me to the church where Robin Hood and Maid Marian are said to have married.  It’s like he likes me, or something *wink*.

Oh, but before that, a lot of important things happened: 1) I met The Gent’s parents AND his awesome kids! 2) I met one of his brother’s, his brother’s wife and their son! 3) I met his best friend and best friend’s fiancee.  4) He still likes me after over a week together 😉

Seriously though, everyone was fantastic and very welcoming, so I’m feeling exceedingly lucky!

His parents were amazing and even took us to Chatsworth House (watch Pride & Prejudice: 2005 and you’ll recognize it!) out in the Peak District: holy gracious, it’s gorgeous – they paint the window frames gold! – and my pictures do it absolutely no justice what-so-ever.  There’s a lot more to see and do there, and I promise, I’ll post pictures next time we go!

I left the States on the 21st of August and am getting my feet under me here in bonny Scotland.  For the next four years – pending any other life changes – I will be living in Dundee and going to school. END_OF_DOCUMENT_TOKEN_TO_BE_REPLACED

Here’s something interesting for you: many people think the Pacific Northwest is only the territory from western Oregon up through western Vancouver, British Columbia.  It’s not.  The Pacific Northwest, AKA: PNW, covers Washington, Oregon, B.C., Idaho, and parts of Montana and California and Alaska.

Spent the long “traitorous colonials” (aka: Independence Day) weekend with my best friend, her hubs, and their two small humans camping out in North Cascades National Park.  There were camp fires, roasted marshmallow stuffed Reese’s (because this Celiac improvises with candy for Graham Crackers, haha!), bugs with little people, hiking and boat rides.  ‘Merica!

The only time I willingly allow bugs in my tent is when a little Heathen happens to be sharing it with me.  All little kids should play with bugs 🙂

These falls…oh, so much more I could have scrambled, but I left Angsty Teenager and the Greekanese at the trailhead by a stream and decided it would be rude to bail on them for more than an hour 🙂

Green Lake – I will see you soon.

As I get older, I find I have a ridiculous appreciation for bridges.  Maybe it’s not overly ridiculous to be glad that people decided to make access to other areas easier, but it still can seem a little strange.  Having previously taken for granted the skills each generation has used to build a bridge, be it steel or wood, I’d just like to send a little shout out to those magnificent bridge builders of past and present – THANK YOU!

The single-lane steel and concrete High Steel Bridge located in Olympic National Forest.  The bridge was built in 1929 and is 420-feet / 120-meters high

View of the Skokomish River and part of the steel supports of High Steel Bridge.  Note the size of the evergreen trees and likely size of the river when you’re 420-feet / 120-meters up! 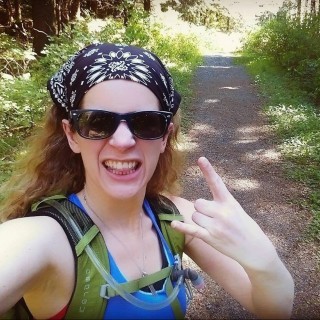 A 30-something year old female full of sarcasm, fairly decent insights, and a pretty good track record of not being a total failure.

Wandering in the Cairngorms and other lesser ranges, by Neil Reid

adults who have adulted - back in school

A resource and haven for working moms

The Darkroom Nerd
The Glasgow Gallivanter

Adventures at home and abroad

"Giving new meaning to the term alpha male where fantasy IS reality."

Dispatches from the Field

To End All Wars

The Diary of a Retiree

The Journey of Self-Discovery